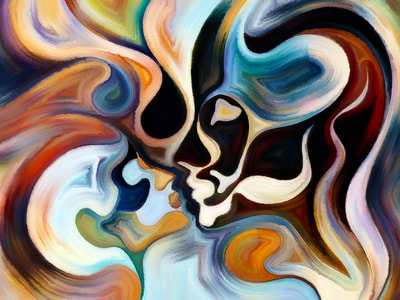 ​“There is no coming to consciousness without pain. People will do anything, no matter how absurd, in order to avoid facing their own soul. One does not become enlightened by imagining figures of light, but by making the darkness conscious.” — Carl Jung

The work of integrating the shadow is truly mystical work, because as far as personal development work goes, shadow integration is the most deeply inner, intimate, stripping yourself down to bare essence and looking at your naked self warts and all, kind of work. People don’t come to this work because they want a spa experience. There is nothing wrong with that; it has its place. But shadow work is the opposite of that.
People come to shadow work, out of hard earned wisdom and a powerful unceasing need to be themselves completely, to be free, to be real, to be accepted as who they truly are. Alternatively, they come to it, because they are so mired in the muck of the dark places of life, and can’t see a way out, that people who care for and love them, advise them to do shadow integration work.

Shadow Integration is a process that at once is very difficult, and can be internally painful, while also being very liberating, vivifying, refreshing. It is one of the core modalities in the Shamanic Healing work.

“It is a frightening thought that man also has a shadow side to him, consisting not just of little weaknesses- and foibles, but of a positively demonic dynamism. The individual seldom knows anything of this; to him, as an individual, it is incredible that he should ever in any circumstances go beyond himself. But let these harmless creatures form a mass, and there emerges a raging monster.” -- Carl Jung, "On the Psychology of the Unconscious."

Carl Jung, the Austrian psychologist, wrote extensively on the shadow. He postulated that during the process of acculturation and civilizing, a child learns that some thoughts feelings and behaviors are acceptable in society and the family (‘good’), and some are not (‘bad’). Some of this programming by parents, schools and society is good and necessary. But some is arbitrary, too specific to the whims and preferences of specific people, who are not necessarily enlightened. And some programming is simply harmful, such as abuse. So as a result, some destructive qualities and tendencies as well as some potentially creative, healthy, and genius ones all get thrown into the shadow. And this process takes place in every incarnation, giving the shadow many layers of repressed energy.

During the process of acculturation, Jung described the mind as being separated into 2 parts, like yin and yang, into The Persona and the Shadow Self. The persona, the ego consciousness, is who we wish to be and wish the world to see us as. It is the ‘mask’, rather many masks we wear in life, and show to others and ourselves.

While the shadow is the unconscious part, the wild, untamed, animalistic, chaotic. Its where we stuff all the parts of ourselves we don’t wish to be, despise, hate, are embarrassed by, afraid of, weaknesses, wild impulses, freaky desires, perverted thoughts, rage, violent wishes, vengefulness, jealousy, etc.

There were many times in human history when good things were considered bad and bad was considered good. Corrupt governments would repress different forms of spirituality, religious and artistic expression, or critical and creative thinking. Healers and Astrologers were burned at the stake for practicing their art. Intelligent people were exterminated, while those who stupidly followed orders were promoted. Drug addicted parents may teach a child to use drugs as a way to cope with life, and belittled the child’s artistic gifts or dreams of a higher education, thus teaching the child that drug abuse and self neglect is good, and creative expression and betterment of oneself is bad. There are countless other examples of how someone can be programmed to think and act as if black is white and white is black.

The idea with the shadow, is that all of the things that are stuffed into the shadow, don’t disappear, a person doesn’t grow out of them, they don’t die. Because energy can’t be created or destroyed. It can only be transformed. So the shadow contents hides, grows in, twisted, and unconscious. When a person is under stress, is ill, or is triggered, these wild traits can jump out suddenly, or threaten to overpower the person.

“What we call civilized consciousness has steadily separated itself from the basic instincts. But these instincts have not disappeared. They have merely lost their contact with our consciousness and are thus forced to assert themselves in an indirect fashion. This may be by means of physical symptoms in the case of a neurosis, or by means of incidents of various kinds, or by unaccountable moods, unexpected forgetfulness, or mistakes in speech... modern man protects himself against seeing his own split state by a system of compartments. Certain areas of outer life and of his own behavior are kept, as it were, in separate drawers and are never confronted with one another.” — Carl Jung

The point of doing shadow work is to delve into those unknown places of your psychi, and find the golden nuggets, the diamonds, the pieces of creative energy and genius that got trapped there, and bring them into consciousness. It takes real courage to do this. Because at some level it is an act of rebellion, and going against what you were taught, possibly for multiple lifetimes. And yet its an essential way to completeness, and being your true self, not a programmed robot.

In mythology, there is the concept of the fountain of youth, that grants immortality. Those creative energies that are trapped in the shadow are the very fountain of youth, because tapping into this field, gives one tremendous empowerment.

The idea is not to indulge our perverted traits, to go out and start acting out our wild tendencies as they appear in the shadow. The point of shadow integration is so you don’t have to do that, to be whole as a person. While the energies are in the shadow, they feel demonic. But once integrated, they no longer feel that way. The idea is that once those energies are integrated and function in a person who is spiritually ready to utilize them, they are creative and beneficial to the self and to humanity, and not destructive.

Shadow integration is not a single event, but a process. Just as the construction of a shadow happens over many years, releasing of these constructs may take months or years. Arriale uses shamanic journeying to facilitate shadow integration work.
Site powered by Weebly. Managed by SiteGround